Many thanks to Carolyn Vance and all the volunteers for their hard work at the Refuge!  To sign up for Public Land’s Day at Seal Beach National Wildlife Refuge, before 9/24/18, please call 562-598-1024 for a reservation and specify “Lands Day Planting”.  Also thanks to Carolyn for all her work on our Twitter Page, she posts a lot about the Refuge, check it out at https://twitter.com/edaudubon (post photo credit: Carolyn Vance)

A lot has happened at the Refuge over the summer! Our California Least Terns did quite well this year, with 117 nests, one with three eggs. We banded 117 chicks and picked up fewer than a dozen non-viable eggs. I will have the updated count next month. We were very lucky this year and only had one instance of predation of an adult Least Tern – just a pile of feathers on the ground, which is typical of a Peregrine take. Many thanks to new Eyes on the Colony Volunteers Betty-Jo Miller, Mort Dukehart, Bill Cullen, Maureen Sullivan for helping monitor our terns this year. Hope you will help again next year.

On July 20th, 11 Light-footed Ridgway’s Rails, captive bred at the San Diego Refuge, were released into our marsh. Our first rail release of six was in 2002. This group of birds was very feisty and one of them pecked Friends Volunteer Christa Shackleford and drew blood. Christa joined a very elite group who have bird-inflicted “war wounds”. There has now been 83 rails released in our Refuge in the last 16 years.

We’ve started a new survey at the Refuge which is really cool. We get to watch for and count the Green Sea Turtles who come into our Refuge to eat our eel grass, which is also favored by Brant. The turtles hang out in the riverbed by the warm water ejection points at the steam plant on Westminster/Studebaker. They wend their way round multiple culverts to get into (so far) three of our Ponds: 7th St., Perimeter, and Case. We watch their heads come out of the water for a quick breath. Some only nostrils; some a whole head; some watch us while swimming; some are just a quick splash while others show the top of their entire shell. This survey, at the request of the Navy/Bob Schallmann, is to help with the Navy’s Wharf Realignment Project Environmental Assessment.

Our regular Tour for September has been replaced with a National Public Lands Day event. We will plant California native plants in our Restoration area, adjacent to Case Pond, held on Sat., Sept. 29th, from 8:00 a.m. to noon. To participate, sign up before Tues., Sept. 24th. Bring water bottles, sun screen and closed-toe shoes. We will supply gloves, gardening tools and plants. Our regular Tours will resume in October.

During July, high school senior girls worked at the Refuge as part of a LEAF summer internship (Leaders in Environmental Action), paid for by the Nature Conservancy. These young ladies helped tremendously: LOTS of weeding, saw how a tide survey is done, helped with a Least Tern round up, the Green Sea Turtle survey and the Rail release. We hope they enjoyed their summer, and thank them for their help!

Birds of Note: If you follow the Chapter on Twitter, you’ve seen my tern chick photos, especially the newly hatched one with part of the shell still on top of its head, like a hat. Our NASA Island resident Killdeer raised two clutches of four eggs each inside the tern colony. I’ve seen two immature Peregrine Falcons, an immature White-tailed Kite, a Black-bellied Plover still in breeding plumage. By our October Tour, fall migration will have started in earnest, and we will have more birds on the Refuge. 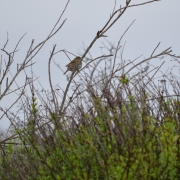 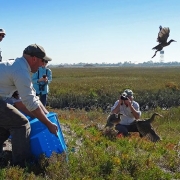 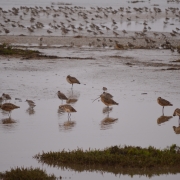